The wine and vacation resort Laudenbach is the largest district of Weikersheim and is located 3 kms away in the idyllic Vorbach valley directly on the cycle path ‘Hohenloher Residenzenweg’.
The impressive skill behind the viticulture in the village dates back centuries.
The two village churches have a special relevance: the parish church ‘St. Margareta’, originally built in 1894/1895 and newly-renovated in 2005 / 2006 as well as the pilgrimage church ‘Zur Schmerzhaften Mutter’ on the hill with the ‘Melchior-von-Hatzfeld-Grabmal’, which was originally built in 1412. 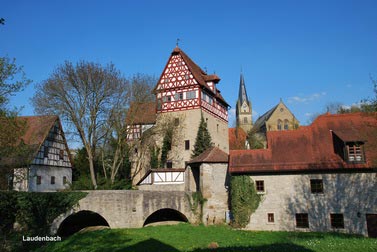 Weikersheim is a town in the region of ‘Tauberfranken’ and belongs to the district ‘Main-Tauber-Kreis’, the north-eastern part of ‘Baden-Württemberg’.
Weikersheim is a state-approved leisure area and ,surrounded by gentle hills, is to be found in the heart of the ‘Lieblichen Taubertal’. It lies directly on the ‘Romantische Straße’ and the ‘Württemberger Weinstraße’, as well as the cycle routes ‘Liebliches Taubertal’ and ‘Hohenloher Residenzenweg’
Architectures of different eras, museums and the historic old town centre make Weikersheim an attractive destination. Furthermore there are several cultural activities, such as art exhibitions, cabaret and concerts of all kinds.
Many festivals and celebrations like the traditional May singing and the folk festival ‘Weikersheimer Kärwe’ complete the full array of activities.
Of importance for Weikersheim is the renaissance castle with its palace garden, orangery, Hercules fountain and the gallery of the gnomes. The castle was constructed in the 16th Century by Count Wolfgang II on the foundations of an old water castle. The impressive ‘Rittersaal’, the baroque interior, the opulent objects d’art and the palace garden were all organised a century later by Count Carl-Ludwig.
Guided tours through the castle take place daily. There are special guided tours for children like ‘Spook in the castle’ or ‘Be a prince or princess for a day !’. 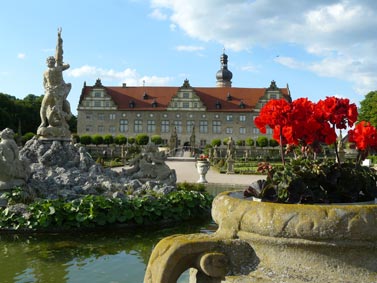 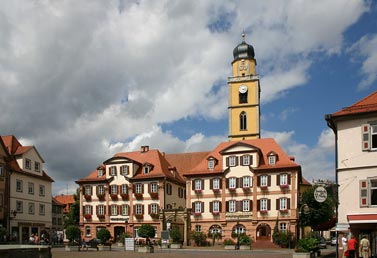